Timothy is peer ranked as one of the top labour and employment lawyers in Canada.

For over 25 years, Timothy has advocated for federally and provincially regulated employers on matters related to workplace law. He is a trusted legal advisor and acts as lead counsel on significant labour, employment, and workplace human rights cases.

Timothy is involved in the resolution of hundreds of labour grievances, human rights complaints, and employment law matters each year on behalf of employers and regularly appears before all workplace law administrative tribunals. Timothy also handles judicial review applications before Courts and the Alberta Labour Relations Board and has represented employers on appeals in the Federal Court of Appeal; including leave to appeal applications to the Supreme Court of Canada.

Timothy is peer ranked as one of the top labour and employment lawyers in Alberta and Canada. Timothy’s commitment to building trusting relationships through counseling employers on their most complex issues contributes to his reputation as one of Canada’s foremost labour lawyers.

Timothy’s experience and insight in collective bargaining and interest arbitrations (litigation to set the terms of a collective agreement) is unparalleled. He regularly handles difficult and complex rounds of collective bargaining in both the public and private sectors, and has acted as chief spokesperson on hundreds of matters, including complex first agreement negotiations.

Timothy routinely works with private and public sector clients from major oil and gas companies to municipalities. He is an especially prominent figure in public sector labour relations. Timothy represents many of Alberta’s municipalities, universities, and colleges in their dealings with unions, associations, students, and government. Timothy has addressed numerous matters under the Reform of Agencies, Boards and Commissions Compensation Act (“RABCCA”) and has successfully obtained several Ministerial Orders from the Minister of Finance on behalf of Boards of Governors for modification to the application of RABCCA to various designated executives in the public sector.

Timothy considers his partnerships with his clients the most rewarding aspect of his practice. Clients appreciate his ability to understand their objectives and break down complex labour relations problems into practical, tailored advice. Timothy’s ability to forge constructive relationships is far-reaching. He believes that strong advocacy for his clients’ interests combined with collegial relationships with decision-makers and opposing counsel net the most favourable results.

Timothy regularly shares his expertise as a speaker or chairing employment or labour conferences throughout Western Canada, and as a lecturer at courses and seminars on employment and labour law. He has contributed to a number of different industry publications including a regular column for the Canadian Employment Law Today Magazine. He has also co-authored a book on employment law entitled Employment Law Answers. 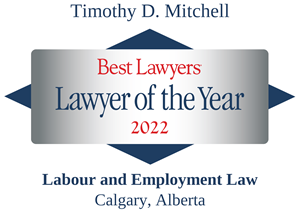